October 21, 2021
I got up at 5 and took a shower then texted him to see if he wanted to get some coffee. He said yea sure give me a few. I didn’t realize that the baby was up til 3. But luckily Jess was up with her. 5 hours that’s all you need for sleep? I told him on this trip sleep is a luxury, but I wasn’t even tired. I walked outside to find the truck with rain drops on it. First time this trip that I had rain. There was some over night mist a few times but not big drops. First we tried Dunkin Donuts but that line was longer than a Starbucks here in Ca during rush hour. So off to Starbucks we went and said nope to that as well, so we went where we should have gone in the first place a Mom and Pop donut shop. As we were turning in Kyle’s door popped open right after he was making fun of the truck and how it turns. I looked at him and said you don’t have to over exaggerate my turning ya ass. The face he made told me he didn’t do it on purpose or that he even did it at all. I asked did you shut it a
Post a Comment
Read more

October 21, 2021
I slept in until 8 and got on the road. I was mad once I found out I lost my YETI cup that Baez had gotten me a week earlier for my birthday!!   Breakfast was granola bars and hot drinks nothing great so I just got some hot coffee and left. I had some things I needed to get. So first things first I decided to get some keys cut because I had no spares. Luckily there was a guy about 5 miles away and he was able to cut me 4 of them. Cheaper than back in CA. They worked great. I also got a true hide a key for the truck instead of just a magnet. After that I found a Bass Pro to get a new YETI cup. Luckily it was on the way out of town, but it was kind of down town. A weird spot for sure. I wanted to see the OKC bomb site and pay some respects but the traffic was really bad and I needed to get to Missouri so I had to forgo that. Next time I will try and make it as Uncle Ralph said it was really moving. Todays planned trip is to make it to Kyle’s house who is about 40 miles from St. Louis
Post a Comment
Read more

October 21, 2021
I woke up at 8 and most everybody was gone, Dawn said it was a early morning for most people. I called Napa and they did not have a starter. They checked all of New Mexico and didn’t have one in Santa Fe or Albuquerque they might have it in Amarillo. I asked them how much for a jump box and he said 350. 350$$$ I said can I return it he said no. I said thanks but no thanks. I then called Bozo’s and he said he could do it if he could get parts but wasn’t sure if he could get parts. He suggested I go to Amarillo. I was on the forums for Garage Journal and 67—72 Chevy trucks and it was a flip for going back to Albuquerque or go to Amarillo so Amarillo it is. I called around Amarillo and the guy people led me too was a place Called Chauncy’s he said he could do it, and Napa didn’t know what the Hell they were talking about. He didn’t give me a price but the way he talked and sounded I figure he was a cool dude. I bought some shirts and filled up my yeti cup with coffee which is awesome
Post a Comment
Read more 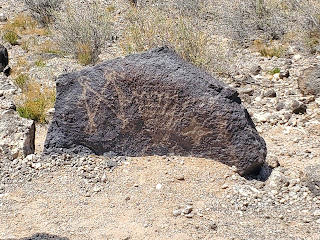 I slept in until about 8 and got some gas at a local place right next to where Frontier was on Route 66. This cool Indian lady stopped and pumped gas and we chatted about the truck and Albuquerque I didn’t realize it was a “big city” but it does have a university. After I got done filling up the truck started right up with no hiccups I thought great. First stop was to see the petroglyphs at Boca Nega Canyon. It seemed weird that it was so close to town and it didn’t dawn on me how close it was. There was literally tracks of homes across the street of where the canyon was!!!!! No ranger but I did my diligence and donated my 1 dollar to go in and climbed the rocks. It was cool to see but Im not sure I would drive all the way to NM just to go see it. It is very small and you could see it all in about an hr. But the fact that I went to go see it. Dad said it wasn’t much and he was right. Right after that it was off to Santa Fe. There is suppose to be some cool museums to go see and I f
Post a Comment
Read more 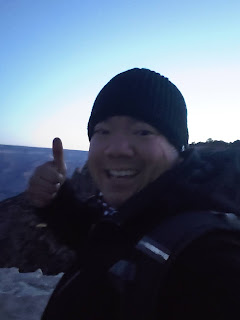 I finally got up around 5:30 since sunrise was about 5:45 and walked to the point. It was beautiful and I am so glad I did it!!! After the sun was up I walked back to the truck and started breakfast which was hot chocolate because I couldn’t find a Starbucks last night and no truck stop sells just grinds only cups of coffee. O well. Hot chocolate a waffle and a Nutrigrain bar and I was good to go. Met a guy name Jason who was from Oregon, it was his birthday and he was telling me how he bought a caddy took it to Nashville and sold it to a guy he met at a bar, but this year he wanted to tour the grand canyon with his girlfriend. Super cool dude. Talked about cars for a bit while he was drinking his morning birthday beer and then he was off to go explore and I wanted to go to Mather point to take more pictures and spread some of Moms Ashes. Spent about 45 min there waiting for the gift shop to open at 9 which was fine by me as I got to explore the point more.  Cell phone coverage was p
Post a Comment
Read more 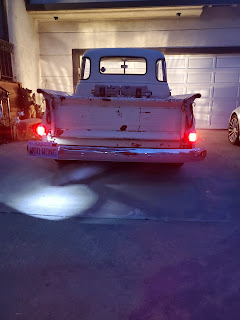 Route 66 Trip So it all started in 78 before I was born when my Mom bought my Dad a 49 Chevy pick up for his wedding present.   In 2019 I bought a TCI frame and a 98 LS1 Camaro and trans which is in it a story of its own. Last year we finally got the truck up and running after having a shop do the finishing work on the engine trans. Last month Uncle Bill helped me do the stereo as it does get boring after awhile listening to the drone of the engine. A week or 2 before this trip I put some insulation and carpet down which helped a lot. I was ready for a fun trip. Mom always wanted to see route 66 and travel the country but she died before she could do it all. So I thought driving the truck would be an awesome way to do this with dad. But dad said no he would not do this since. It would be too long and uncomfortable and he would rather not do it. He said I should take my X5… but what fun would it be to take a new car on an old road. He said I should wait to do it after the truck was al
Post a Comment
Read more

Chinese Cowboy
I am the Chinese Cowboy, My medicine has a cowboy style and I own a cattle ranch here in the Bay Area